The Galapagos Islands are a bucket-list destination for many travelers – I know they were for me. I recently returned from seven days exploring these fascinating islands and believe me with 19 islands to choose from – each having its own distinct climate and landscape, as well as unique flora and fauna – there is literally something for everyone!

However, it is the wide range of active experiences and not the landscapes that will have me going back again and again. Don’t get me wrong the landscapes are BEAUTIFUL, but interacting with the land and its residents was by far the highlight of my trip.

Below are my favorite “Must-Do” experiences and I would recommend including them on your next trip to the Galapagos Islands.

Experiences you just have to try for yourself!

Explore the highlands of Santa Cruz

The misty top of Santa Cruz Island is rife with its own charms. Giant Tortoises can be seen ambling along the road. The breathtaking views from Cerro Mesa Reserve are nearly 360 degrees, and for the adrenaline-rush crowd, you can bomb down 2,000 ft on mountain bikes all the way to Garrapatero Beach. 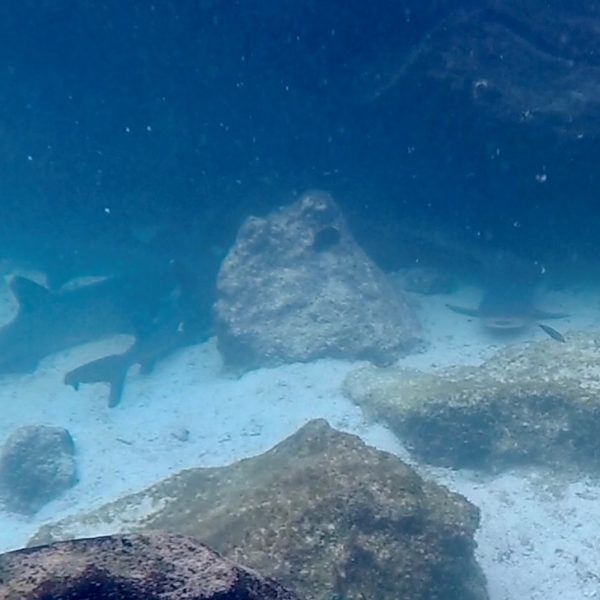 Catch a boat ride from Itabaca Channel to South Plazas Island off Santa Cruz. Along the way, the boat will stop for snorkeling among the colorful fish, sea turtles, and perhaps a whitetip reef shark – or a dozen. Don’t be surprised if a curious sea lion zooms up to you. They want to see you just as much as you want to see them! 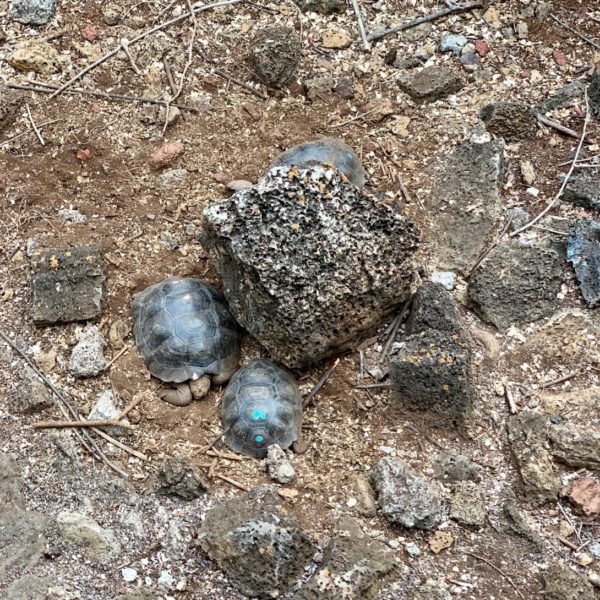 You can see Giant Tortoises in the wild throughout the Galapagos Islands, but here you can see the efforts to bolster the populations of the different species up close. You can see tiny tortoises that could fit in the palm of your hand as well as mature ones that you swear you could ride on. But please don’t!!! 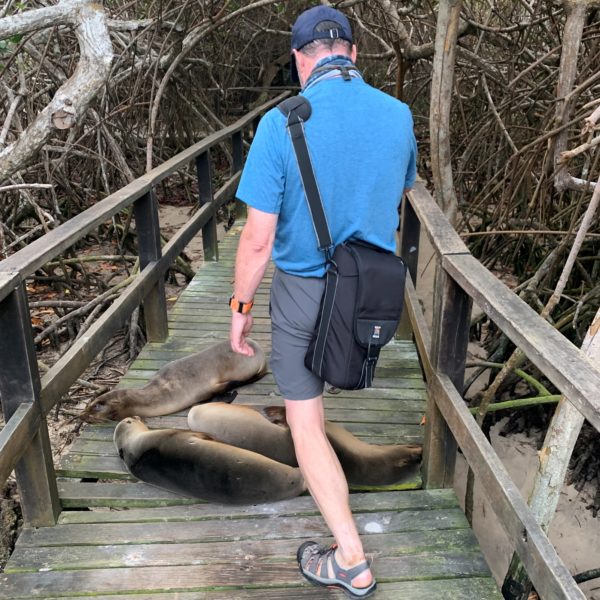 This is more of a have-to than a must-do. Iguanas and sea lions will thwart your path in many places. Never fear, because they certainly don’t fear you! Just step over them. The worst that can happen is an iguana snorting out saltwater through its nose at you or a sea lion raising a weary head and yawning as you pass. 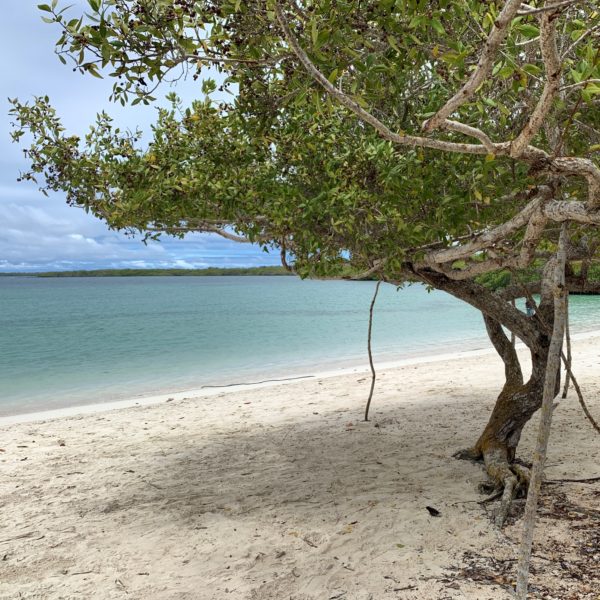 Take the walk to Tortuga Bay

Walk along the beach while watching diving pelicans and resting marine iguanas to Playa Mansa Beach, a protected cove where you can kayak or snorkel. 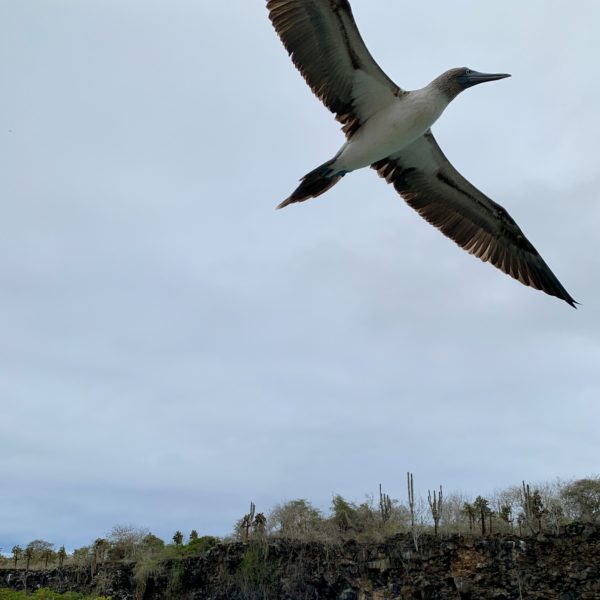 Don’t forget to look up

Witness the stunning birdlife that is always flying above. Soaring frigate birds, boobies diving or flying past in small groups headed toward feeding areas, and finches of every sort fluttering about. Look down too, because in some places you can see flightless cormorants and penguins! 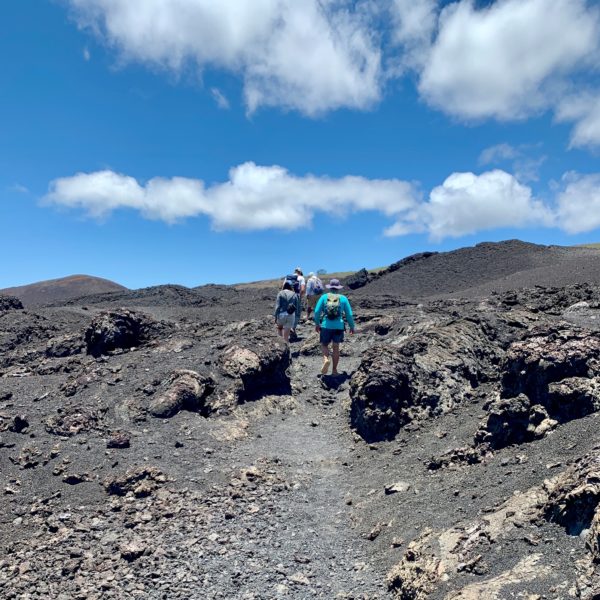 It’s the biggest and the youngest island in the archipelago, as well as, the most active. It has six shield volcanoes, five of which have recently erupted. Sierra Negra has erupted twice in the last 13 years. It is also the volcano with a beautiful and strenuous, 9-mile hike to and around its caldera rim. Look down and you think you are on the moon. Look up and see this seahorse-shaped island sprawl out before you with the cones of the other volcanoes easily seen.

Isabela has her marine charms as well. Incredible snorkeling opportunities abound here. Los Tuneles is an amazing experience. Collapsed lava tubes flooded by seawater have created an unreal environment for hordes of sea life including lobster, shark, boobies, and turtles. Concha Perla is another gem where you snorkel in a protected pool which is adjacent to a coral reef. You may see stingrays, turtles, sea lions, and maybe even a penguin or two!

This is but a small list of what you can do on a land-based itinerary in this extraordinary place. Some programs can have you visiting up to five of the islands (see Explore with Sven: Galapagos). While there isn’t a “better” way to visit the Galapagos Islands, land-based itineraries do afford visitors the chance to experience places a little more in-depth than cruising. Each has its advantages. Contact us to talk with one of our South America Specialists to see which way might be the best way for your visit.