When you book with an account, you will be able to track your payment status, track the confirmation and you can also rate the tour after you finished the tour.
Sign Up
3826
Availability : March 5 – 13, 2020

Price includes transatlantic airfare from Minneapolis/St. Paul (please inquire for pricing from your US departure city)

Join Twin Cities meteorologist Sven Sundgaard on this extraordinary adventure to the Galapagos Islands, where you will be introduced to the islands’ unique species and habitats. With Sven’s passion for conservation and saving our planet, you’ll understand the importance of preservation and protection of this delicate ecosystem.

The Galapagos Islands are located 600 miles from the mainland of Ecuador and consist of 19 volcanic islands on the Equator. The islands and surrounding sea are teeming with life, unspoiled nature, and a unique history dating back to its discovery in 1535.

Each island has its own distinct atmosphere & landscape, and special flora & fauna. From volcano summits, dramatic lava flows, and breathtaking vistas, to the sea, remote mangroves, cliffs and coasts, this journey will allow you to get close to its nature, experience the local lifestyle, and absorb the beauty of this incomparable part of the world.

Thursday, March 5Depart the US

Depart from Minneapolis, or your home city, to Quito. Overnight at Wyndam Airport Hotel

Depart Quito on the flight to San Cristóbal. After arrival, you will tour the Visitor’s Center to learn more about the origin of the archipelago, its fauna and flora, as well as its history and first inhabitants. After that, you’ll enjoy a two-hour hike to Frigate Hill with its endemic vegetation, a beautiful view of the island and its surroundings, and the Frigate birds. There will be snorkeling at Frigate Bay before you return to the hotel. Dinner and overnight in San Cristóbal

The climate of Española is very dry, with only a few inches of rain per year, like most of the archipelago. Due to its isolation, Española Island keeps a high percentage of native species. You’ll visit Punta Suarez and Gardener Bay on the island with a stop for lunch along the way.

At Punta Suarez you’ll find albatross, blue-footed and Nazca boobies, Galápagos hawks, Darwin finches, swallow-tailed gulls, snakes, shorebirds, Galapagos doves, marine iguanas, lava lizards and sea lions. Española has a volcanic feature called the blow hole, a geyser-like formation made by a tunnel through which the water spouts up to the height of 65 feet or more. The view along the cliffs is also breathtaking. Gardner Bay is an excellent place for snorkeling, with calm and transparent blue waters where you can come face to face with sea lions, rays, white-tipped sharks, and eventually sea turtles and curious marine iguanas. Over 60 different species of fish with a variety of coral, sponges, and sea urchins can be found here. Overnight in San Cristóbal

You will travel by boat to Santa Cruz Island and arrive at the bustling town of Puerto Ayora. Then you’ll head inland, where the road climbs through the agricultural zone, into the mist-covered forests of the highlands.

Santa Cruz Island possesses all the various life zones present on the archipelago, with wonderful birding opportunities. Whether it is the bright red feathers of a Vermilion Flycatcher or one of Darwin’s finches, almost every land bird present on the islands can be found here. You’ll stop for lunch and visit the Tortoise Reserve. The rest of the day is at your leisure. Try a local restaurant for dinner this evening! Overnight in Puerto Ayora

This morning after breakfast you will take a speed boat to Floreana Island, a 2 ½ hour trip. This Island has, arguably, the most interesting human history of all the Galapagos Islands. It is the site of the first “post office”, established in 1793 by whalers. It was the first island to be colonized by Ecuadorians in 1832 and served as a penal colony that was unsuccessful due to lack of fresh water. You will meet some local farmers and learn about their way of life, which exists far from technology and development. There will be an opportunity to feed the farm animals and harvest vegetables, and your lunch will be prepared with ingredients from the farm.

You’ll hear more about the island’s history with a visit to a pirate cave and the caves where the Wittmer family lived as some of the first residents of Floreana. You will see giant tortoises that were originally owned by residents of Floreana, as well as giant tortoise species from this island that have been recently re-introduced, since they were considered extinct. Tonight, enjoy a tasty BBQ dinner on the beach surrounded Floreana’s peace and quiet. Overnight on Floreana

Today, you’ll walk to “La Loberia”, a sea Lion breeding area. There will be an opportunity to swim in the bright turquoise water with sea lions, sea turtles, manta rays, and a variety of colorful coral fish. After a delicious lunch made with foods harvested from a local farm, you’ll board a speedboat to Isabela Island. After approximately 2 ½ hours, you’ll arrive the quiet town of Puerto Villamil. Dinner and overnight in Puerto Villamil

After breakfast at your hotel, travel by car to the Sierra Negra Volcano. You’ll walk to the crater (approximately 2 ½ hours), learn about the volcano’s geology, and take in the wonderful view of the crater as you enjoy a box lunch.

You’ll also visit Tintoreras Islets, home to a great variety of wildlife. Its turquoise, crystalline waters are inhabited by white-tipped reef sharks, Galapagos penguins, marine turtles, and sea lions. One of its beaches, surrounded by mangroves, is one of the few sites where marine iguanas can successfully reproduce. Dinner is on your own. Overnight in Puerto Villamil

Optional Excursion: (In place of visit to Sierra Negra Volcano)

Snorkeling at the Tunnels, “Los Tuneles”
The Tunnels were formed millions of years ago when rivers of liquid magma ran across the island reaching its coastal shore. The cold water froze their superficial layer isolating the interior while liquid magma kept flowing into the sea. When the eruption ended, a hollow structure was formed and its wall later broke allowing water to seep inside, creating a tunnel. The guide will show you hundreds of tunnels while you snorkel and encounter marine life such as sharks, lobsters, penguins, sea lions, boobies, marine turtles, among other endemic species of the Galapagos. A snack will be served on board the boat (*Box Lunch is not included).

You’ll depart Puerto Villamil to take a boat to Santa Cruz, where you will visit the Charles Darwin Station. The center is a reservoir of information on habitats and local conservation, as well as other fascinating relevant statistics. The most striking attraction of this station is certainly the Tortoise Breeding Center, where you can walk around freely and have your pictures taken with the tortoises. Overnight in Puerto Ayora

After breakfast, you will visit “Los Gemelos”. These two large pit craters along the road from Puerto Ayora to Baltra were caused by the collapse of empty magma chambers. There will be photo opportunities at both craters.

You’ll transfer to the airport for our flight to Quito for your connection with international flight to the US – or extend your stay in South America! 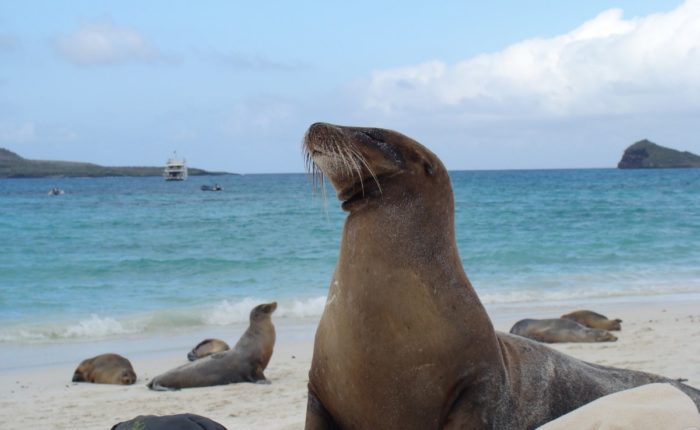 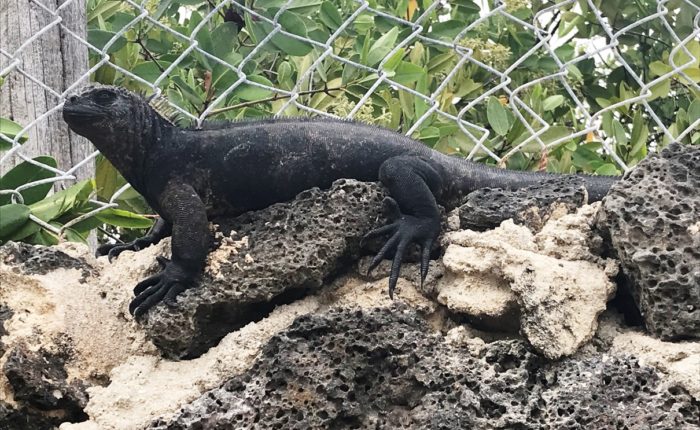 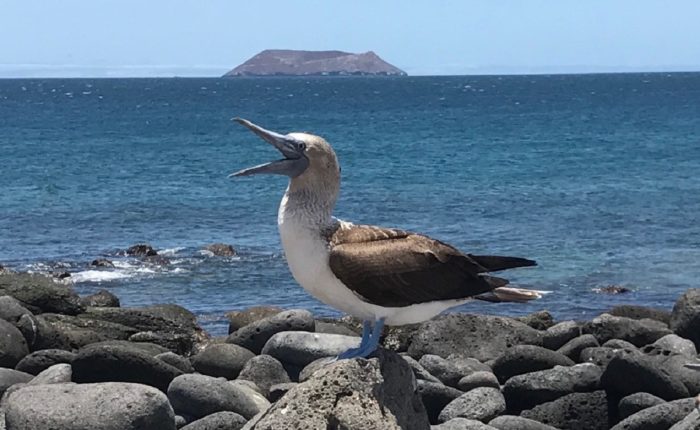 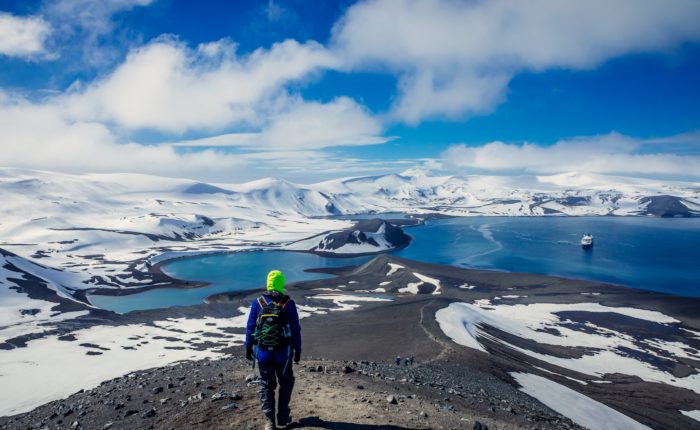