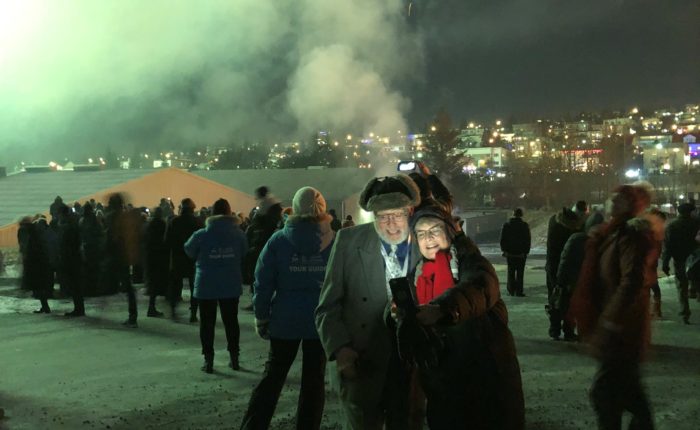 There are a number of amazing places to ring in the New Year. Las Vegas, Times Square, Sydney, and Dubai all offer fireworks and fun activities for visitors. However, the ultimate destination for someone hoping to experience fierce local enthusiasm mixed with amazing pyrotechnics is Reykjavík. For New Year’s Eve 2017/18 we held another Signature Journey in Iceland’s capital city, inviting travelers to come along with us for a short trip to the land of fire and ice.

My name is Andrea, and I had the great pleasure of leading the most recent New Year’s Eve Signature Journey to Reykjavík. It was an absolute blast. We had phenomenal weather (for Iceland), and all members of my group were able to do different day tours each day, to really experience the parts of Iceland that they wanted to see. This ranged from the Golden Circle, to the South Coast, to hiking through a Lava Tube Cave.

The highlight, of course, was New Year’s Eve. We spent the day together, first enjoying a visit to the Aurora Center, followed by the famous Cheese & Skyr School. We then had some time to spruce up before heading to Perlan, or The Pearl, a spherical glass building located on a hill just outside of the center of Reykjavík. At Perlan we attended a gala dinner. The food was delicious and the company was even better.

In Iceland there are three very important aspects of every New Year’s Eve. The first is huge bonfires and the second is fireworks. (The third is an SNL-style skit show that comes out once a year on New Year’s Eve that only makes sense to Icelanders.) We left the gala around 10 p.m. and headed to one of the biggest bonfires and enjoyed watching the flames while fireworks were being set off all around.

After returning to Perlan, we enjoyed dessert while waiting for the main event at midnight. (While we were having dessert, the locals were watching their show.) At midnight, it was time. Standing out on the deck with a glass of champagne in our hands, we saw something amazing. Right as the clock struck 12:00 a.m., more fireworks than you can imagine were lit off. Every house, business, and apartment building seemed to be setting off fireworks. We were on a 365° deck, and in every direction there were massive amounts of fireworks. It lasted for what seemed like forever, but was actually, maybe, only 10-15 minutes. When it was all done there was a haze over the entire town, which was eerie but also very cool. We slept well that night, knowing that we had seen something outstanding.

The next morning we headed to the Blue Lagoon, tired from the long night but feeling like the energy we had witnessed the night before would never leave us.