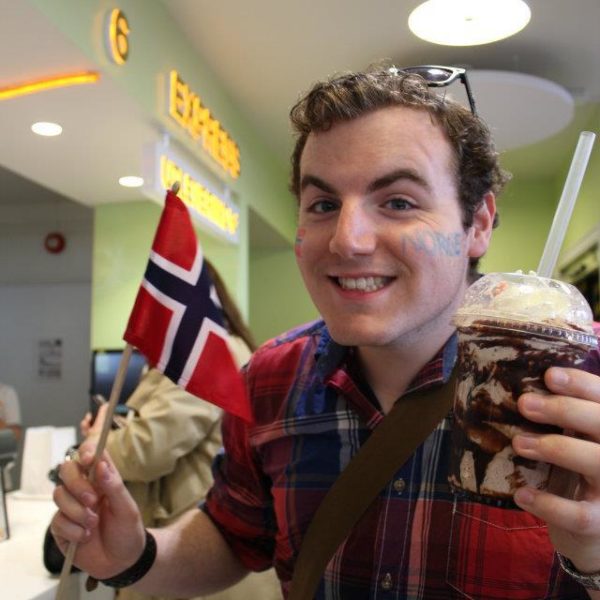 Lucas is excited to use his oddly extensive knowledge of Scandinavia at Borton Overseas! Born in California and migrated to Minnesota in middle school, he received his double B.A. in Theater Arts and Scandinavia Studies from the University of North Dakota – where he studied abroad at both The University of Oslo and The International Summer School of Oslo. As a proud Norwegian-American, Lucas has roots in Trøndelag and is very active with the Nordic-American community in the Twin Cities. Although he has traveled all over Europe, Norway will always have a special part in his heart with Iceland and Estonia nestled close by.

As a theater artist, Lucas has worked as a stage director, costume designer, Norwegian translator, dramaturg and arts manager for various theater companies in Minnesota and Norway.

What aspect of travel do you enjoy the most?

I love learning about the “real people” of whatever country I am visiting. To me, the most enjoyable part of travel is taking an afternoon walk through a neighborhood or having a break at a café to watch the locals around me. Museums are great and touristy attractions are a must but nothing is as great as seeing the world through their eyes.

What is one thing you would never travel without?

Besides my passport, travel insurance. Travel insurance is the best way to protect yourself and your travel investment, so I would never step on an international flight without it!

What has been your most life-changing travel experience?

When I traveled alone for the first time. That first trip all by myself was a huge step in my comfort and confidence in navigating airports, customs, flight schedules, and all the other pieces one has to keep in mind when traveling. From there, I got the travel bug and haven’t put away my suitcase since.

What has traveling taught you about yourself?

Traveling revealed to me my need to take a breather during a trip and to not be ashamed of that. So many times when traveling, one gets the urge to see and do everything at once. This lead me to being tired and unfocused during the most exciting parts. To take short respites throughout the day really makes the overall experience less stressful and more enjoyable. And then I am at full capacity for the next exciting bit, just around the corner!

What is your favorite destination, and why?

I would not be a good Norwegian-American if I did not say Norway. My time living there taught me so much about my heritage, the world on a global scale, as well as the perfect place to grow into adulthood. I was able to make amazing relationships in all areas of life, which really helped to shape my path in life. That said, I have plenty of favorite spots all over the world: Bruges in Brussels, Toledo in Spain, and of course who doesn’t love London? But these fantastic places are always just below Norway.

Have questions? We can help!

From expedition cruises to Antarctica to heritage discovery tours to Scandinavia, our Destination Specialists know how to design exclusive experiences all while delivering exceptional service. Call Borton Overseas today at 800-843-0602 or contact us online.